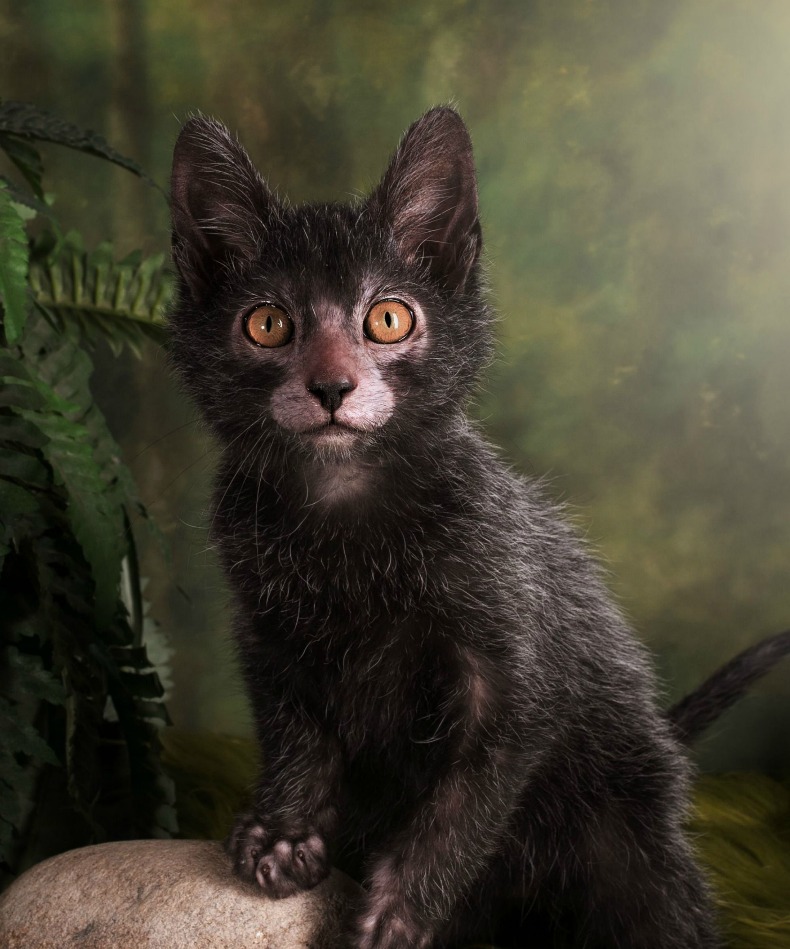 Either she took it slow after a while or I was faster than I thought I was. I was winded by the time she stopped her bike in front of a wooden cabin in the middle of nowhere. Ophelia jumped off my shoulder and darted into the house the moment that the door opened. “Well I guess she’s home now.”

I heard a voice in the house call out as loud as the weak voice could carry, “Bring him inside!”

The woman sighed and looked at me, “Oma would like you to come inside, Feras.”

I sighed and nodded, I’d heard perfectly fine, but I hated the slur. “My name is Nox.” I followed her inside the door. I wasn’t stooping to calling her names, though I could think of several I could call her that would be not only degrading but sexist and racist. Two things I tried not to be.

I followed her into a bedroom where a woman lay in bed and Ophelia was pawing at her chest making herself comfortable before laying down. She was purring happily. “Ophelia says he’s the one, Jena.”

The younger woman looked at me and then frowned. She turned back quickly and laughed. “He’s just a kid, he’s Venatori and he’s a he!”

“Ophelia said he’s the one.”

“Why would she need a new owner? Me? Why me?” I sounded like I was whining and maybe I was. I could barely take care of myself how the fuck was I going to take care of a cat too.

“Ophelia says that you are who she wants. I’m old and dying and Jena and Fee do not get along too well. They have a dark past.”

Oma laughed. “Nox it is, yes?” I nodded my confirmation. “Nox. Ophelia is a special cat. She has special needs and it takes someone very special to take care of Fee. You are Venatori yes?”

“Ah.” I said. Conformation of what she knew but couldn’t see.

“Ophelia, was not the cat’s original name, nor is it the name of the ghost who possesses the animal.”

Jena sighed. “When I was young the woman came to us, possessed me and tried to drown others in retribution of what was done to her. A old witch of Salem drowned. She tried to drown my mother, but Oma threw the ghost from her body and locked it in the cat. It wasn’t happy at first, but as the years drew on she accepted her immortal life. Unable to leave the body of the cat, at least we think so. She came to love Oma and Oma her. But Oma is going to join my mother soon and Fee and I don’t see eye to eye.”

“So your possessed cat needs a new home?” I asked.

Oma smiled. “And she’s chosen you.”

Jena and Oma both laughed. “No.” Oma said, “Afraid not.” She looked at her granddaughter with a smile, “Pack Ophelia’s things and give them to the nice man so he and I can have a little chat.”

He turned to me and patted the bed. “It’s really uncanny that you can’t see but know exactly where we are.”

“Sort of. She wishes to pass the connection however minor it is to you. I only need to touch your forehead.”

I sat down next to her and leaned down. “I guess if I have no choice.”

Ophelia walked up to me and purred against my chest as Oma touched my temple where the Venatori tattoo was. I felt a hum of magic, I probably could have seen the pattern if I’d been watching it happen but I could never see the patterns around myself no matter how hard I tried. Oma smiled, “She’s chosen wisely.”

The cat curled up to Oma and purred. “She’s a Werewolf cat, or more properly called a Lykoi. All the rest of the information you need you will learn. You and Ophelia.” Oma closed her eyes. “Tell Jena I’m going to take a nap and she can come back in the morning.”

I walked through the house looking around. It was a normal house I’d never have known it was owned by a family of wicca with a possessed cat. My possessed cat.

Ophelia jumped from wherever she was and landed on my shoulder and perched herself comfortably, her claws no longer digging in, she felt confident. I did too actually.

Jena handed me a bag of things. “She has no cat food, she’ll eat whatever you feed her but she prefers human food, as if she were still human. Oma wouldn’t tell you this, but I will. It’s better to be on Fee’s good side than bad. A mouse head in your bed is not a fun thing to find.

I grinned. “Better than a horse head.” I said.

Jena looked at me and frowned, “You and Fee will get along so well. These are her things. Enjoy her.”

I nodded. “Thanks.” I wasn’t sure I sounded confident but who would having a cat thrust on you?