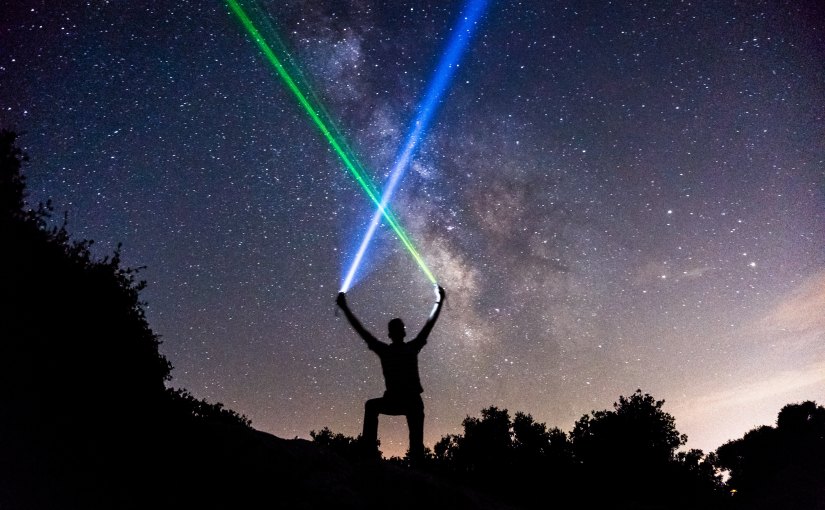 Alex quickly caught up to me and had his wallet out before we even reached the window to buy our entrance. “Two.”

“Would you like a single game, or an all day pass?”

Alex looked to me and I shrugged. “All day pass.” Though I was doubtful we’d play a game all day. But Alex paid for it and we walked inside, he pulled me through the double doors and from the coat room into the large and very loud gaming center. “I haven’t been to one of these in years.”

I mumbled, “My first time.”

“I hope not. I like it a little rough.” I said as I walked away from him. I didn’t really have a destination in mind but there was a balcony which I risked looking over to see the field below. I didn’t look long before I was turning around and leaning against the railing watching Alex watch me.

“You alright?” He asked, “You look a little pale.”

“Heights. Though I think this game is almost over.”

Alex held out his hand, “Opposite sides if we are going to see who’s better.”

I nodded. It was always more fun to play games with someone you knew. On the same side was fun in most cases, but this was more about learning your opponent. Which in turn was learning about him personally. Watching his patterns, his motives, his actions. Always analysing things.

Alex chuckled, “So in depth pretty boy. I just want to shoot you.” He grinned and tugged me along to the staging area. He was red, I was blue. We each had a team of three other boys who looked like they’d played a few too many video games. Alex was ushered off into his area and I into mine.

One of the boys, he was thinner than the others. His red hair and freckles made me think of Ron Howard’s character in Happy Days – one of Sage’s favorite old timey shows he made me watch as a kid. Said it was the only show he remembered watching with his Dad – his biological father before he died. He seemed to be the de facto leader, “Hey old guy.”

“Old guy, don’t slow us down. We got the other boys, you take down your friend the other old guy.”

We were shown how to use the guns properly. We were told not to jump from the high points that said do not climb. And we were told no running. All rules I could handle easily.

The game clock started and our guns were activated and the chest baubles lights flashed on and the game started. We had 30 minutes to kill as many opponents or capture their flag. The boys just wanted to shoot things. Which was fine with me. That’s what we did. There was no strategy just a bunch of boys shooting around and yelling. I watched and the other team ran from pillar to pillar trying to get past us and to our flag. Their strategy was a little different. My team was missing like crazy and running around rolling on the ground like they were Navy Seals or something.

The first boy came into sight and I sniped him down without giving away my position. But I moved anyway. Catching the second one with him with a quick roll to the next pillar. This was almost too easy.

Alex was behind a pillar and I knew he could hear me. He wasn’t watching so I thought one thing, then did the opposite. He got that part too but which was truth. He chose wrong and turned into me my gun at his chest level and his lights were flickering he was out. I grinned at him. His hands covered his heart, “I thought this was your first time.”

I smiled. “It is. But I do this for a living remember.”

The last boy was trying to sneak up on me and I didn’t even turn when I fired and shot him.

The lights came up and the time stopped. “Not even ten minutes,” the boys on my team shouted. “No fair.”

“Another game?” He asked me loud enough for the other boys to hear.

Alex snickered, “Maybe we should all go against him.” He gave me this look that said teach you.

I shrugged,”If you think you can beat me that way.” I winked at Alex.

“Oh I can beat you all sorts of ways.” He smirked.

I bit my bottom lip as they other boys pushed me towards the red and they all stayed on the blue. I was really going to do this. I sighed. Alex called from the door, “Hey pretty boy!”

I turned at looked, “Yeah?”

“See ya on the playing field.”

I nodded and gave him a smile. I was happy to see him anywhere, his lips spread in a smirk as he read me and I couldn’t help the smile that changed on my lips. I loved that smirk.

I focused on seeing that and only that as I got ready by myself. It wasn’t the first time I’d had everyone against me. The first time I had used my powers openly on a field of play in survival everyone felt it was them against me. So I was the target of even my own side. Fair is fair they said. Funny thing about paintball though, you can’t hit me if you can’t get past the air shield. That technique wouldn’t work here, air wasn’t going to stop the laser light.

I could stay hidden until the timer ran out. Hidden in a veil. But that was cheating. I found a corner I could see everything in the shadows but they couldn’t see me. I only had one person to worry about – Alex. I could shield but I wasn’t lying when I said it hurt. So he was going to find me. I was kinda counting on it. He was number one on my kill list at the moment. Him out of the game, the rest would be cake. Though he knew that too. I was in a pickle.

A shadowed figure came up beside me and instead of shooting me he pressed his body against mine backing me deeper into the shadows. “You just never shut up, do you?” Alex whispered against my skin.

I caught the perfume and others on him again and I waited – waited for the next move. Was I faster than him? But I didn’t get a chance to find out as his lips pressed against mine. I couldn’t help the moan that escaped my lips from deep within my throat. Alex was chuckling as the lights turned back on and I looked down at the flashing lights. “I win.” He smirked. “You are so easy pretty boy.”

I stood staring at him biting my bottom lip. Fuck I wanted more than a kiss, but he smelled like sex and other people. His smile faded, I hadn’t hidden the thought. He took my hand and led me out of the room. He discarded our gear in silence and then he took my hand and lead me away. We were in a small hall that lead to the bathrooms, it was the quietest place Alex could find. He pressed me against the wall with one hand to my chest. “For the record I didn’t have sex.”

“What you do in your free time is none of my business Alex. I just wish you’d listen when I say don’t come around smelling like someone else.”

“When did you tell me that?” Alex dropped his hand from my chest and took a step back staring at me like I was an alien or something he didn’t understand.

I shrugged. “I don’t know. I thought you knew Venatori have a strong sense of smell.”

“Nox. I took a shower, I changed my clothes and you still smell it on me, what more do you want?”

I shrugged. “I don’t know.” My eyes dropped to his feet and I felt lost again.

“Jesus fucking Christ, Nox. Why do you do that?”

“Do what?” I asked without looking up.

“Go all submissive and complaint when I’m angry with you.”

I took a deep breathe and looked up to meet his fiery ice blue eyes. Such a contradiction of terms but they were on fire with anger – anger at me.

“What the fuck did they do to you?” He grabbed my hand and we headed out of the facility. We walked past the first train stop and the next one wasn’t for another few miles. Long Island City wasn’t like the City, the stops were farther apart, but I wasn’t sure Alex knew that but I didn’t say anything.

We walked several blocks in angered silence. I could feel the anger seething off Alex. His hand was tight on mine but not painful, just like he was afraid I might run away. Maybe he was afraid of running away. “I’m fucking hungry. I want pancakes. Know a good place around here?”

I shook my head. “No. I don’t ever come out here unless someone makes me. Mia and Jace live in Brooklyn but I couldn’t tell you what was there either. I can make you pancakes. I’d have to buy the ingredients, I don’t have them on hand.”

A smile spread across his lips but he didn’t look at me. “Ever made pancakes before?” He asked.

“No, but I’ve made crepes, the concept is the same.”

He stopped and looked at me then sighed, “I don’t know how to get home from here.”

I grinned, “Do you want to walk farther or back the way we came is closer.”

Alex turned around spinning me in place and then headed back the way we came. “I should think before I storm away.”

I grinned, “It’s okay.” I squeezed his hand, “I don’t mind storming away with you.”