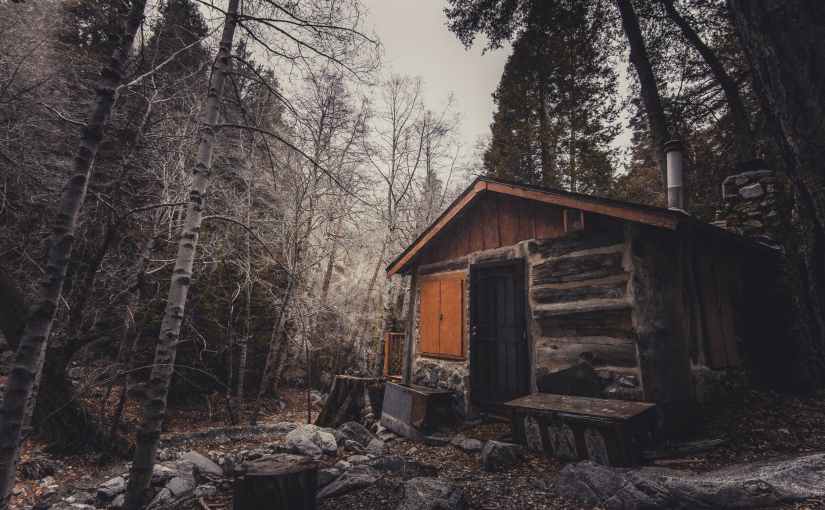 Alex lead me through a patch of trees and down a pine straw covered path deeper into the woods. I remembered the path. I remembered the building. Alex opened the door and flipped on the light. A small lamp in the corner of the room lit up. “It’s not much.”

I laughed. “Can they hear us at the main house?”

I put my hands on Alex’s hips and tugged him towards me. “Maybe I want to make you scream.”

“I don’t scream,” Alex said with a bright smirk that hid the fear in his eyes. “How about I make you scream? Who the fuck cares if they hear us at the main house?”

I smirked and spun us around pressing Alex’s hips against the door. His arms fell around my neck. “I can make you scream.”

“On another day I would so let you try.” He tried to walk away, but I pressed him against the door with my body flush against his.

“We aren’t really going to have a better time to try. It’s just us in the middle of no where, I can make it so no one can hear us. No one’s going to walk in.”

“Everything’s just sex with you isn’t it?” Alex joked, but he wasn’t into it. Nothing I was saying was turning him on, except my body pressed against him. His normal reaction to me being near.

I let him go. “No.” But I didn’t move. If Alex was uncomfortable I’d let it go. I didn’t need anything but him happy.

“You aren’t even going to ask me why?” Alex asked as he walked towards to queen sized bed on the other side of the room.

“Ask you why you don’t want me to make you scream?” I grinned at him. “Nah, I know all about my little mushu’s control issues. Screaming would mean letting go.” I bit my bottom lip and turned to look at him sitting there taking off his shoes. “One day, you’ll beg me to make you scream.”

“You don’t care do you?” he asked never looking up.

“I care that you don’t want to do something.”

I interrupted fast and furiously. “Every time I ask you a hard question, a personal question. Every time I ask you to tell me something deeply personal you shut me down. So no Alex, I don’t care why you don’t want me to make you scream. I do care that you don’t want it, and if you never trust me that much I’m okay with it because something in your past made you this way. Something you don’t want to talk about something, if you really wanted me to know you’d tell me.” I backed up to the door and pressed my back into the wood to feel something solid behind me. My anger was in control. And just like every other emotion I felt it consumed me. I slid to the floor and pulled my knees to my chest but I didn’t curl up into the ball to hide from Alex. I just pressed my head and back against the wood of the door and felt solid. Felt supported. This wasn’t about me.

The silence strained my ears. The only sound was us and our vital functions. Alex cleared his throat. I looked across the room at him. His hands hung limply from his arms, his elbows resting on his knees. He looked like he was about to puke hanging his head over the bed the way he was. I wanted to go to him, but I didn’t think he wanted me to. He spoke softly, “I was young. My mother wanted something from this women, and the only play we had was sex. She was a business woman with connections and she had the names of some big money in a ledger she kept in a safe. I needed the combination. Sex was always the easiest way to get that kinda information. Mother expected she was a vanilla power slut and I could do it easily enough I was young, hot and with the right grooming I could look older – old enough for her anyway.”

Alex took a deep breath, it sounded ragged in his chest. I crawled across the floor while he continued, I was careful not to spook him. “She was into power just not the power my mother thought. I let her tie me up. She…” Alex was rubbing his wrists at the memory. I stopped in front of him and sat down. I reached up with the tips of my fingers and touched the pads of his. He took another deep breath and grabbed my hands and squeezed tightly, almost too tight, but I didn’t say anything, didn’t wince or let on I just let him hold my hands. “She gave me a safe word and brought me to the edge. And there she kept me with vibrators, totally hands free while she masturbated in front of me. I begged her to stop Only remembering my safe word at the very end, she knew I was close to breaking, she said, ‘Scream for me.'” Alex shuddered and I stood up on my knees and wrapped my arms around him. “I screamed my safe word over and over but she was lost in her orgasm and I was lost on the edge.” Alex wasn’t crying but his body shook. His heart was racing. “I can’t be what you want Nox. Not even a little.”

“You think I want that?” I asked, taking his hands in mine and sitting on my heels looking up at him. “The only thing I want is you. I won’t bring it up again.” I bit my bottom lip and tilted my head to the side. “But Alex, I like the being on the edge. I like giving you all the power. I like being tied up. But I don’t need any of it. What I need is you. I just need you.”

Alex just stared at me, I don’t think he was really there, still trapped in the memory. “Alex?” His eyes focused on me and I smiled. “How can I help?”

My smile widened. “I wasn’t asking to fix this, I was asking how I could help you right now, in this moment. Do you want me to hold you? Do you want me to go away? I don’t want to fix it Alex, I want to make you happy. And if right now making you happy is letting you be sad alone, then I’ll go away.”

Alex was shaking his head as he laid down and pulled me with him. “Just get up here.” I kicked off my shoes and climbed up behind Alex, my arms still around him and I was at his back pressing against him, it was such a novelty.

We laid there for a little while and I could hear Alex’s breathing getting slower, he was falling asleep and as much as I’d love to hold him I had a question, “Alex?” He hummmed. “How long are you going to stay out of my head?”